When we think of the gold rush, we typically think of California. However, Reed Gold Mine, located in Midland, North Carolina, is the site of the first commercial gold find in the United States.

In 1799, Conrad, the son of John Reed, found a 17-pound yellow “rock” on the family farm. For three years, the rock served as a bulky doorstop until a jeweler identified the rock as a large gold nugget and bought it. Then around 1803, John set up a small gold mining operation on his property.

It wasn’t until 1804 before anyone made the difficult journey to deposit some gold at the Philadelphia Mint to turn some gold into coins. $11k was deposited that first year, with deposits only averaging around $2.5k annually until 1824 – marking the real start of America’s gold rush.

Not all of the southern gold was taken to the Philadelphia Mint. Templeton Reid briefly operated a private mint in North Carolina in 1830, and the Bechtler family ran a successful mint from 1831 until about 1850.

When the southern gold rush expanded throughout the region in 1828, more than half a million dollars of gold annually was transported to Philadelphia. That’s when the Charlotte Mint opened its doors in December 1837. In its first year, the Charlotte Mint received deposits of over $130k.

In May 1861, North Carolina seceded from the Union. The Confederacy seized the Charlotte Mint and continued coining until October. The mint was then converted into a hospital and military office space for the rest of the Civil War.

In 1931, the building was going to be destroyed. However, a group of private citizens acquired the structure from the U.S. Treasury Department in 1933. They relocated it east of downtown Charlotte to the historic neighborhood of Eastover on a plot donated by E.C. Griffith. In 1936, it was dedicated as the Mint Museum of Art, the first art museum in North Carolina. Today, you’ll find thousands of items, along with a complete collection of all gold coins minted at the Charlotte Mint.

Total deposits equaled almost $5.1 million until the mint closed in March 1861. Most of its domestic gold deposits, $4.5 million or 89%, were from North Carolina. All Charlotte gold coinage from the mint has a “C” mint mark to distinguish it from other mints in operation at the time.

The Basic and Expanded Type Sets

A type set of Charlotte gold coins includes one example of each major type struck at this mint. Such a set includes the following:

A total of eight types were struck at the Charlotte Mint. A complete eight-piece type set is an excellent collection. Most collectors who assemble an eight-piece Charlotte type set do so in grades ranging from Extremely Fine-40 to About Uncirculated-58. This set could be completed in Uncirculated, but it would be very difficult to do given the rarity of the 1838-C Classic Head half eagle in Mint State.

The coins that are included in a Charlotte-type set are generally the more common dates. Some collectors use better dates to make their sets more interesting and potentially more valuable.

A Complete Set of Charlotte Gold

A complete set generally consists of the following: 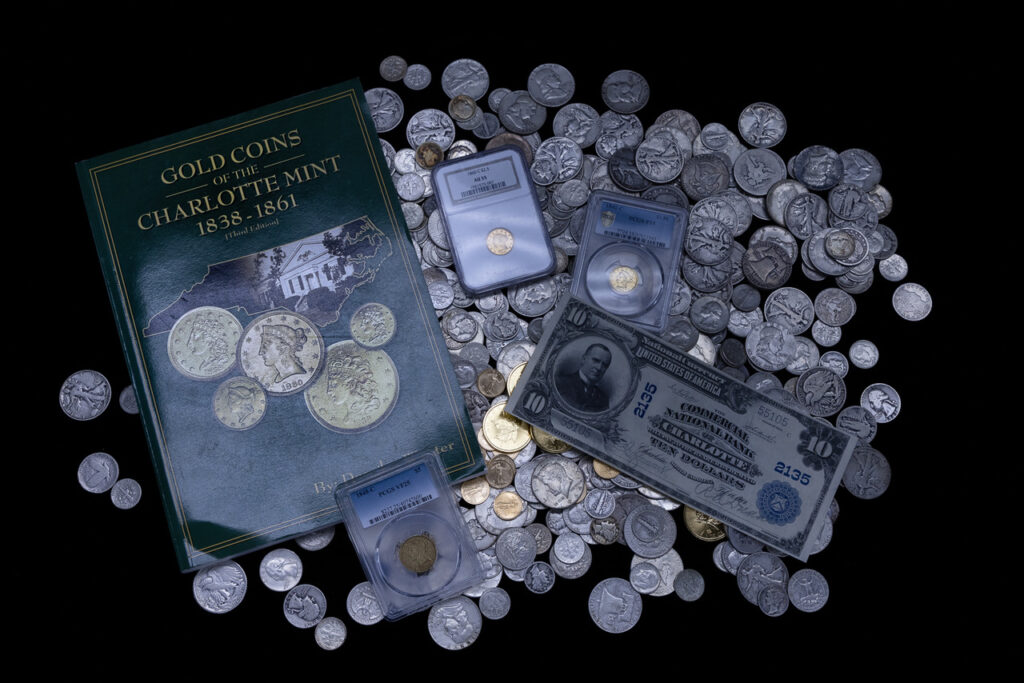 Visit our coin shop to see the Charlotte minted coins we have available!